What is the Eurasian Economic Union (EEU)?

The treaty was signed in 2014 and has been effective since 2015. The aim is to create a single market between these five states in which there is freedom of movement of goods, capital, services, and people.

We could say that it is a kind of European Union between countries of the former Soviet Union.

However, the Eurasian Economic Union has formed only 5 years ago. Full integration has yet to be implemented, although many steps in this direction have already been taken.

Let’s see in detail various aspects of the EEU.

Since the collapse of the Soviet Union in 1991, 15 independent states were formed.

The new states tried to create trade agreements to support their economies, however, the results were not satisfactory.

The economies of the new former Soviet republics were quite different from each other. Some of the new states’ economies had been mainly based on exports of oil and natural gas, while some others have no relevant natural resources.

For this reason, the economic interests of the new 15 states were in many cases not aligned, and often in conflict. Moreover, political tensions also persisted between them.

Important developments took place only in the 2000s.

The three Baltic countries (Estonia, Latvia, and Lithuania) joined the European Union in 2004, breaking away from the former Soviet bloc in a definitive way.

After years of discussions, however, there were also important developments in the creation of greater economic integration of the other CIS countries.

CISFTA is a free trade area in which there are not export and import duties on a wide number of products among the participants.

I made a graph below to better visualize the situation (which is quite complicated).

At this point a question arises: if the countries have agreed to make a free trade agreement (CISFTA), what is the Eurasian Economic Union (EEU)?

Why make another deal a few years later?

The Eurasian Economic Union (EEU) is an agreement that goes far beyond the CISFTA.

The EEU deal is not limited only to the free movement of goods without duties, but introduce also the freedom of movement of persons, capital, and services.

The idea of EEU is to create a deeply integrated market. By now, only 5 countries have joined the Eurasian Economic Union: Russia, Belarus, Kazakhstan, Armenia, and Kyrgyzstan.

Let’s see in detail what are the objectives of the EEU, and what has been achieved.

The Eurasian Economic Union (EEU): What Has Been Done

As we said previously, the goal of the Eurasian Economic Union (EEU) is to create an area in which goods, services, people, and capital can move freely within it.

Free movement of goods and services

The idea is, like that of the European Union, to create a larger market by adding together the individual smaller markets.

Furthermore, the economic bloc has greater bargaining power in negotiations with other countries.

The creation of a single market for goods and services is partially achieved. From one side, duties and quotas have been abolished. On the other side, rules about product regulations and homologations have not yet been effectively homologated.

For example, in the European Union, if a product is approved in Italy, it can be automatically exported to Germany. In the EEU this automatism is not yet effective as administrative controls persist.

Furthermore, some sectors have not yet been liberalized like oil and gas or financial services.

As regards relations between the EEU bloc and the outside world, free trade agreements have been effective with Vietnam, China, Serbia, and Singapore. Iran has also signed a free trade agreement with EEU and it should be effective from 2021. Negotiations at an advanced stage are ongoing with Egypt and Israel.

Let us not forget that the five members of the Eurasian Economic Union (EEU) are also part of the CISFTA. So a free trade agreement also exists between EEU and Moldova, Uzbekistan, Tajikistan, and… Ukraine.

As you know from the Russian occupation of Crimea (2014), relations between Ukraine and Russia are at an all-time low.

Although both countries are members of the CISFTA free trade area, Ukraine and Russia have introduced tariffs on each other.

It’s a complex situation because, in theory, the circulation of goods is free in CISFTA, but two members have duties and sanctions in force among them.

Another goal of the Eurasian Economic Union (EEU) is to ensure that citizens of the five-member countries can move around freely (e.g. for work).

In theory, a citizen of Russia, Belarus, Kazakhstan, Armenia, or Kyrgyzstan should work everywhere inside the EEU perimeter and should be smooth procedures to access health services and the pension system.

From the information I have found, it would seem that there are no problems with the transfer for work. However, but I have not been able to understand if access to services in the host country is simple and smooth. If you have any information about it, we would like to receive your feedback to update the article.

The main objective for the next years is to realize in practice the formation of a single economic bloc.

It has been discussed the creation of a single currency that would replace the Russian Ruble, the Kazakhstani Tenge, the Belarusian Ruble, the Armenian Dram, and Kyrgyzstani Som. However, this is unlikely to happen in the short/medium term.

It is under discussion the sharing of political power by the five founders to act jointly in some areas, such as foreign policy. Again, it does not seem possible that this will happen in the short term. By the way, looking at the experience of the European Union, this goal could be difficult to achieve even in the long term.

Finally, could it be that some states join the Eurasian Economic Union (EEU)?

Moldova should be the next country to join the EEU, it has already obtained the status of “observer member” in 2017.

It is difficult to predict “when”, because experience teaches us that the timing in the accession of international treaties can be unpredictable. There is no precedent: Moldova would be the first country to join the block of founders.

Tajikistan and Uzbekistan (already members of CISFTA) have expressed interest in joining in the future, but nothing definite.

Mongolia has also expressed interest, but in this case, the path could be very long because Mongolia is not part of the most important commercial treaties of the former Soviet republics.

Regarding the other former states of the Soviet Union :

Turkmenistan is not interested in joining since it has chosen a policy of isolation. It is not part of the CISFTA or even the Commonwealth of Independent States (CIS).

Azerbaijan is also not interested in joining the Eurasian Economic Union. Let’s not forget that has been a military conflict a few months ago with Armenia, with one of the founders of EEU.

Georgia said it was more inclined to join the European Union.

Ukraine: given the recent conflict with Russia, its membership is to be excluded.

What about new free trade agreements with other countries?

Eurasian Economic Union is a relatively recent reality (2015) and many trade agreements are under discussion.

More than 50 states have expressed an interest in signing agreements for greater cooperation with the EEU, among others: MERCOSUR, Bangladesh, Cambodia, Chile, Ecuador, India, Indonesia, Jordan, Morocco, Pakistan, South Korea, Thailand, and Tunisia.

A Currency Revolution in Cuba in 2021

Anyone who visited Cuba surely knows of the Cuban currency system, which is very particular. In... 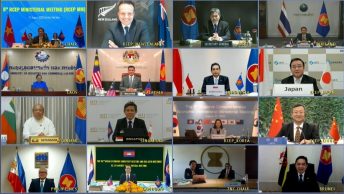 Source: Mahanakorn Partners On November 15, the members of the ASEAN community, plus China, Japan...